Cabo San Lucas is one of the world’s premier whale-watching destinations. Thanks to the warm, tropical climate in Cabo, whales migrate south every winter from the waters of British Columbia, Alaska, and Washington State. During whale-watching season, it’s possible to see dozens of these majestic aquatic mammals splashing in the Pacific. If you want to have the best chance of seeing whales up close, a bit of pre-planning is in order.

What Kinds of Whales Can You See in Cabo San Lucas?

Humpback whales and gray whales are the primary species that migrate to Cabo San Lucas. On a whale watching tour, you’re most likely to encounter humpback whales, as they are the most active. It’s not uncommon to see them splash, play, and breach in the water.

During whale-watching season, Cabo is also home to blue whales, fin whales, Bryde’s whales, and sperm whales, though these varieties are less commonly seen by humans.

If you see a whale with small knobs on its head and long flippers that look like wings, you’re probably looking at a humpback whale (see photo to the left).

If you see a whale with a narrow head, gray to white skin, and paddle-like flippers, you’re probably looking at a gray whale. 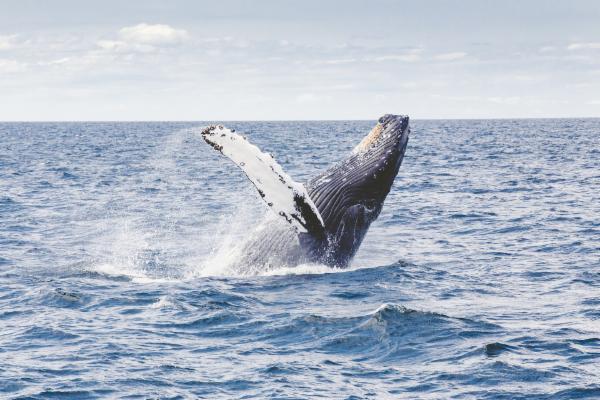 When Is Whale-Watching Season in Cabo?

Cabo’s whale-watching season lasts from mid-December through mid-April. During these colder months, whales are drawn to the warmer waters near the equator for the purposes of mating and giving birth. Not only do the waters of Cabo San Lucas provide a more comfortable environment during the late fall and winter months, but they also provide a safer atmosphere for giving birth, as the whales have fewer predators in this area.

Is It Possible to See Whales Off-Season?

December 15th marks the official kickoff of whale-watching season. However, whales are motivated by temperatures, not calendars. Depending on the temperature, whales may arrive as early as November and return north as early as March.

It’s very rare for whales to stick around past April, but November arrivals are fairly common. Humpback whales, in particular, are known to arrive as early as November 1st. Your chances of seeing a whale between May and October are slim to none.

How Do You Choose the Right Whale Watching Tour in Cabo?

The best way to see whales in Cabo is on a guided whale watching tour. When choosing a tour, though, consider the cost, the boat, and the time of departure.

Since you’ll sometimes need to take multiple tours to see any whales, it’s important to choose a tour that offers a quality experience without breaking the bank.

Researching the tour ahead of time is important because you want to go with a reputable touring company that offers an enjoyable experience and is knowledgeable about whale watching.

Finally, consider the time of day. If you’re prone to seasickness, choose the earliest tour available. The winds in Cabo tend to pick up in the afternoon, resulting in a rockier trip.

How Much Does a Cabo Whale Watching Tour Cost?

Most Cabo whale watching tours cost between $50 and $250 per person. The costlier tours typically include longer durations, more luxurious boats, and occasional amenities like onboard dining. The more budget-friendly tours offer the same whale-watching potential but with fewer accommodations.

For the big spenders, there are private whale-watching tours on luxury catamarans. These tours can run $900 or more.

What Are Your Chances of Actually Seeing a Whale in Cabo?

The merging of the Pacific Ocean and Sea of Cortez creates a junction with perfect breeding conditions for whales. Humpbacks alone can account for as many as 18,000 whales in the region during winter. In other words, there are plenty to see.

During the most active period between December and January, your chances of seeing whale activity on a tour are as high as 90%. The odds decrease gradually between February and April, but they remain high throughout the season. Even at the end of the migration period, your chances of seeing a whale are better than 50 percent, especially if you take multiple tours. 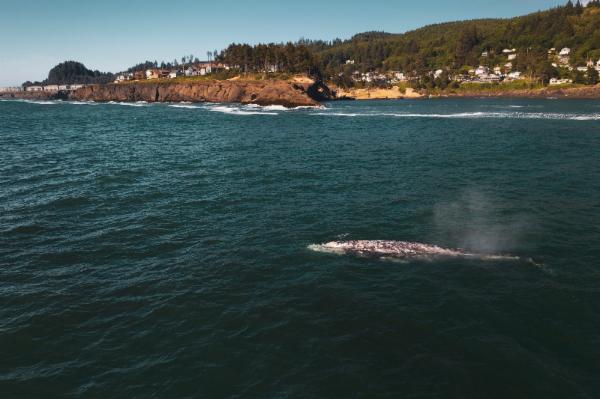 Can You See Whales Without a Tour?

It is possible to see whales from the beach. Humpback whales especially are known to venture close to the shore and splash about. However, a guided tour gives you the best chance of seeing whale activity up close. Tour guides are trained to recognize the most active locations and are able to venture far from the shore, ensuring that you cover the maximum amount of water and have the best chance of seeing whales up close.

If you have your own boat and would like to whale-watch independently, explore the waters near the southeast tip of Cabo. This is where the Pacific Ocean meets the Sea of Cortez.

When Is the Best Time of Day to See Whales in Cabo San Lucas?

While there’s no specific time when whales are most active, there are advantages to taking tours at specific times of day. The seas tend to be calmest in the morning, so it’s easier to relax and concentrate on the watch—especially for those prone to seasickness.

Afternoons tend to have better ocean visibility since the sun is higher over the horizon. During the afternoon, it’s easier to see whales beneath the ocean’s surface. 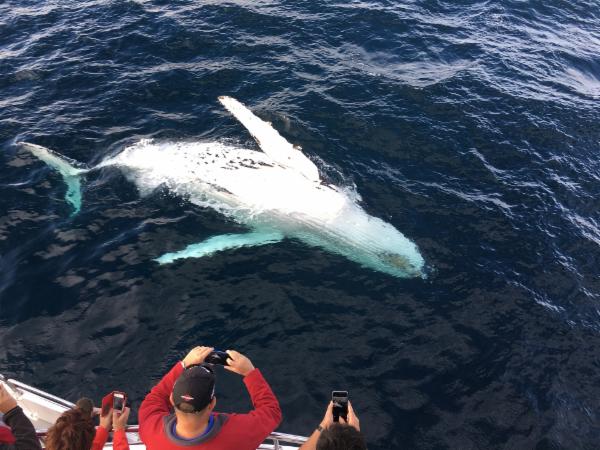 What Should You Bring When Whale Watching in Cabo?

Cabo has a tropical climate with year-round warm weather. Throughout the whale-watching season, you can expect highs in the 80s and lows in the 60s.

Be sure to dress comfortably for these temperatures, as you’ll be at sea for hours at a time. Bring sunglasses, sunblock, a good pair of binoculars, a quality camera, and some water and snacks. Some tours restrict the items you can bring on board, so be sure to review the rules before boarding.

Can You Swim With Whales in Cabo?

If your goal is to swim with the whales, your best bet is to book a snorkeling or scuba diving excursion. Some tours will ferry you to locations where whale activity is common and provide you with the accessories needed to dive into the sea and swim alongside the humpbacks and grays. There is no guarantee that you’ll see whales on your snorkeling or scuba excursion, but the experience is unforgettable regardless.

If you want to give yourself the best chance of seeing whales in Cabo, it’s all about timing and persistence. Strive for late December into January if possible. Opt for a guided tour with a reputable touring company. If you don’t mind slightly heavier swells, choose an afternoon tour with maximum ocean visibility.

If you don’t see whales the first time around, try again. During the whale-watching season in Cabo, you’re almost guaranteed to see whale activity with a bit of persistence. If you rent a luxury villa in Cabo San Lucas, you can take your time and enjoy numerous whale watching adventures. And even if you don’t see nature’s largest mammals up close, you still can’t beat the breathtaking coastal surroundings.